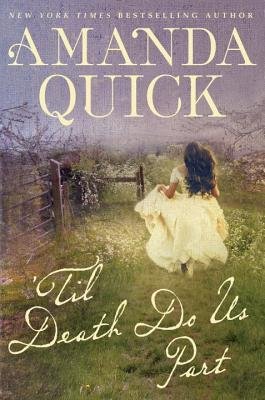 Calista Langley operates an exclusive “introduction” agency in Victorian London, catering to respectable ladies and gentlemen who find themselves alone in the world. But now, a dangerously obsessed individual has begun sending her trinkets and gifts suitable only for those in deepest mourning—a black mirror, a funeral wreath, a ring set with black jet stone. Each is engraved with her initials.

Desperate for help and fearing that the police will be of no assistance, Calista turns to Trent Hastings, a reclusive author of popular crime novels. Believing that Calista may be taking advantage of his lonely sister, who has become one of her clients, Trent doesn’t trust her. Scarred by his past, he’s learned to keep his emotions at bay, even as an instant attraction threatens his resolve.

But as Trent and Calista comb through files of rejected clients in hopes of identifying her tormentor, it becomes clear that the danger may be coming from Calista’s own secret past—and that only her death will satisfy the stalker…

Note: I received this advanced reader’s copy  via netgalley by Berkley Publishing in exchange for an honest review

I’ve read every single Amanda Quick novel – finding her work at an early age, I  immersed myself into her spitfire heroines and Victorian romance novels that were never cut and dry, but also featured a fun murder mystery (well if you wanna call that fun). Although her novels have a habit of following a similar formula, I can say this novel was not the customary mystery romance novel and I cannot contain my joy!

‘Til Death Do Us Part was dark and shown a spotlight on serious issues for women, and marriage, during the Victorian Era. This took precedent, for me, over the characters and plot in this review because it’s not the standard writing style of Quick, so when an author can veer off a habitual pattern of writing and have it be successful it allows me to appreciate them more than I previously did.

Quick illuminates the harsh reality for women that weren’t born fortunate and therefore delivered into a career that was unforgiving – governesses. They were victims of rape, harassment and overall ill-treatment by their employers (not all). Lacking the voice in society for any of their plights to be heard or helped they  were walking targets and often turned out into the streets without references if they were caught with their employers no matter if it was rape or not.

This information was mentioned and commented on in this novel in detail and, really, that’s what this entire novel is about. It’s a story about the underdogs underdog, the unseen, the unheard, the bottom. This is the reason we’re never taken to the Ton or immersed in the flourishing era of ballrooms, gowns, and posh tea parties – this is the reason we’re given Calista Langley.

Calista Langley isn’t the typical Quick heroine, she’s the cold-heated character with ice running through her veins. Afraid of love, unbeknownst to herself, she’s similar to the male characters that are presented in most of her novels. After learning the hard way that love “doesn’t exist,” Calista isn’t interested in finding a husband and is living comfortably off of her income as the owner and operator of an exclusive “introduction.”Her predicament lies in the fact that she’s being stalked, or preyed upon, by a madman who’s sending her trinkets and gifts suitable only for those in deepest mourning with her initials engraved.  She’s also receiving declarations of unrequited love from her, now married, ex-fiancee who’s married to a woman he cannot get rid of. In the beginning she deals with the problem the best way she knows how, until two things happen:

Although Trent is our hero, they began on very rocky ground. He believes she’s attempting to scam is lonely sister with her business, so he pretends to be interested in the services’ for himself. With this encounter he learns many things about Calista and he’s intrigued. Because of this he returns and is greeted with a disheveled Calista, this is the moment he becomes partners in crime-solving with her.

Trent Hastings is a tortured soul. Being a mystery writer he feels more at ease with words than people and parties, and his only activity lately consist of research for his mystery novels. His agreement to help her solve t

he mystery was both selfless and selfish. Being a well-traveled man he was bored with the life he currently led, unbeknownst to himself until he started his investigation with Calista.

Together they’re taken into the mind of a deranged killer and a sadistic high class member of society hell-bent on destruction; which is also interwoven with the the uncaring nature society had for demises of many governesses.  The villain in this novel wasn’t very clear, it took time and constant thought for me to unfold the mystery and it’s worth the suspense once the killer is revealed. Just like the romance that slowly builds between Calista and Trent.

Calista and Trent had great chemistry and had lots in common the raising of their siblings and the limbo state in which they found their lives with said siblings. Calista’s brother Andrew was growing older and more defiant toward his sister for the lack of freedom of felt possessed him, whereas Trent’s sister felt an obligation toward him because of past events she believed where her fault and left a scar on his face. Along with the dysfunctional families they both were a victim of, it’s really a match made in heaven.
Overall this book is solid featuring a solid mystery with red herrings thrown at the reader, a sweetly built romance, and a properly dark, Gothic tale of the secret Victorian era.

8 thoughts on “‘Til Death Do Us Part by Amanda Quick”